Working with internationally renowned Alex Skolnick and local metal bands, UnBlock the Rock achieved the impossible task of bringing Cuban metal band Escape from Havana to perform at South by Southwest in March of 2013.

I met Cuban metal band Escape in August of 2007 when they were performing every other Sunday with other Cuban metal bands, Zeus, Combat Noise, and Hipnosis at a tiny bar across from Parque Menocal, the Park of John Lennon, in the Vedado section of Havana. 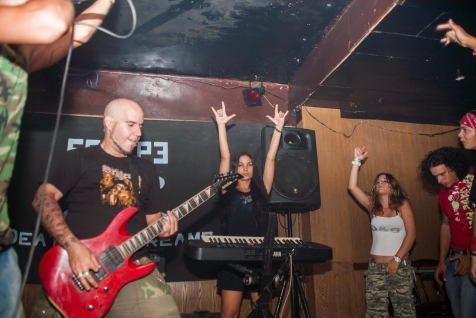 Dela and Alejandro of Escape rocking out with Dionysius of Zeus, Atelier 8/2007

Yanio and Yando of Escape, Atelier

Yanio, Justo and Alex at Atelier

Two years later, I quit my job teaching and left to shoot They Will Be Heard, a documentary about Escape, where they came from, and where they are going. I finished shooting in Havana after Jennifer Hernandez was brought to New Jersey under the Family Reunification Act, in February 2010. Jennifer and I launched “UnBlock the Rock”, (UBTR) a campaign to bring Escape to the United States. Working with film producer Monica Hampton and legendary guitarist Alex Skolnick of Testament, UBTR hosted several events, including UnBlock the Cocktail (below) and a “Rockupation” of the City Hall building in Jersey City, where Skolnick performed “Libertad”, an Escape anthem, with Chris Harfenist of Sound of Urchin and Faisal Talal of  Iraqi metal band, Acrassicuada.

In 2010, it was virtually impossible to bring a Cuban artist, much less 6, to the United States without serious financial and political backing. Some non-profits were successful, but some would also endure the lengthy and absurdly expensive process of applying, only to be rejected. Using our events to create branded content to raise funds and awareness, along promoting UBTR through social media with our tagline, “It’s our time,” UBTR established ourselves as a poor but serious grassroots effort. We joined forces with David Peisner, who wrote about Escape initially in the Red Menace for Spin and then again, writing about our entire process bringing not only Escape, but members of Ancestor and Agonizer too, for Buzzfeed in an article entitled, “Libertad.”  Peisner was also instrumental in helping UBTR raise funds. Working together, UBTR and Peisner put together “THE RED ALBUM” a compilation of tunes donated by the SuperSuckers and Eye Hate God among others to raise funds.

After Escape’s performance in Austin, they returned to Miami. UnBlock the Rock was based in New Jersey and New York, and we were dying to bring the band here. Alex Skolnick, who already donated so much of his time and talent to the effort, put Jennifer Hernandez in touch with Rudy Sarzo, the former bassist of Quiet Riot, Ozzy Osbourne, and Dio, who is also of Cuban descent. Rudy put UBTR in touch with a generous donor who gave UBTR the money to bring the band to NYC. Everything Jenny and I dreamed of, and even more came true. For more information about “They Will Be Heard,” a documentary that tells the story not only of Escape, but of the inevitable union of the people of Cuba and the United States or for consultation on creating your own multimedia campaign, please contact Tracey at traceynoelleluz@gmail.com.