The following, “Food For Thought” was originally published in August of 2009 as part of “The Great Escape; Tales from when I left my mediocre existence to make a movie about Cuban metal band Escape.”

To compensate for my terrible taste in men, I’ve been granted the uncanny ability to go to third world countries, infamous for food shortages, where people having been wearing the same underwear for 6 years, and get a heaping plate of food as soon as I walk in the door. I’m in a country where each family is allocated a small portion of ground coffee each month, and yet the first two words I hear every morning are “Quieres cafe? Quieres cafe?” Invites became so frequent, that in a short time I was insulted, curious, indignant when I wasn’t fed at someone’s house. Is something wrong? I thought. Maybe they forgot. Maybe they forgot my four-course meal. With coffee at the end. The kind they get only once a month.

I don’t know if it’s my (¡terrible!) spanish that leads my Cuban friends to think I am completely incapable of feeding myself, or if this kindness and hospitality is typical. I am walked across the street, fed, nourished, hugged, burped, encouraged, changed, and fed again. This kindness stripped me not only of my defenses, but also of common sense. I didn’t need to do anything. Julian, poppy, the daddy of the house I live in, got sick for three days. I was rendered defenseless. Me, the New Yorker with the “Hi, this is Tracey and I’m out doing whatever I want,” voice mail message looked in his kitchen at the stove and pans with wonder and bewilderment. I was like three-year old Helen Keller, with the spatula in my hand, with no one to spell it out (in spanish) on my palm.

I am grateful for this kindness. Cuba is a tough country. The men on the street are aggressive. Sometimes there just is “No Hay.” The Spanish is rapid and relentless. It’s a wonderful thing to go to a country other than your own and have a community there that has somehow collaborated in the maintenance of your well-being. But I am unable, really, to eat any more meat. When a heaping plate of food is placed in front of me, there is invariably a huge chunk of pig right in the middle of it. I’m a buddhist! I whine internally, which comes out like, “Muchas, gracias! Que rico!” Ten years ago, I would have been content to suck on dirty cardboard to affirm my support of the Cuban revolution. I would have been extolling the virtues of free education and health care happily shoving dog shit into my mouth. In my older age, I am the gloomy taco bell of Cuba, remixing the same four ingredients in a different pile trying to create the illusion of a new dish to sustain me over the next 5 months. Sure, fresh mango juice every day sounds delicious until you’ve lived it for like 4 weeks. And you become aware that this is all there is. Kombucha anyone? Carrot juice with spirulina?

I never liked chicken. And fish is out of the question since the fiery god of hellfire food poisoning bestowed upon me a wrath so great that I was expunging from every orifice, okay, both orifices, of my body. I don’t know if you’ve ever shared the toilet with your mouth and your ass but the pornography of it all has left me dependent on Omega 3’s.

Cuban markets are full of mangos, avocados, pinas and papayas mixed in with other vegetables I don’t recognize. Sometimes eggs. The string beans are always the color of string beans in a can. Gone are the days of Aki’s cooking, of “just a taste” of her Japanese curry. Gone are the nights of left over pasta dishes contrived by Micheal and purchased at Trader Joes. Of heavenly whorish imperialist isles of Whole Foods. 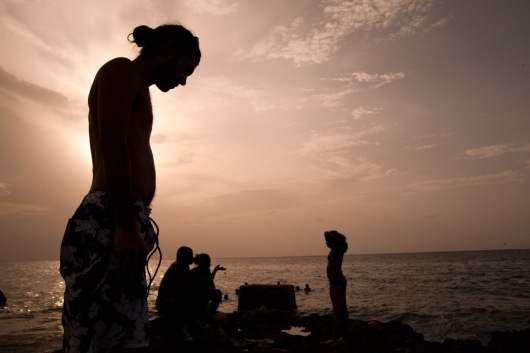 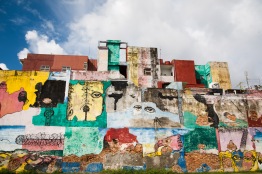 Like any good lefty, I took to the streets. If you want to eat street food, there is an assortment of ham like things. Hammish? Hammy? Ham-oriented. Of pig origin. Once I bought a croquette sandwich, and then I was pretty sure I saw Julian feed the same croquettes to his cats. I realized that I could be eating something very similar to the meat like substances served to poor black children in Newark, the biological warfare against our youth, masked as school lunch, and, viewed through that lens, I swore off any street meat. Which left me the option of pizza and batidos, or milkshakes. Yay! My 12 year old dreams come true. But I saw my skin pallor change. Pallor, I thought. I’m too young to have pallor. But that’s what happens when you eat something pizza-y or pizza-ish and milkshakes every day.

Like any good American, I looked to buy my way out of the situation. There are stores just for tourist money. Very expensive stores. Very expensive stores that sell brands that aren’t exactly tomato sauce or peanut butter or spaghetti but something like it. A representation. Red And White. The color of your blood cells before consuming these foods injected with an unnecessary and gratuitous amount of sugar. To mask the taste of chemicals. Red and White. Red no. 6. White no. 9.

The last time I saw a generic brand like Red and White that has emerged somehow unmolested by the FDA, actually the last time that I asked “Isn’t this how you get colon cancer?” with regards to my eating habits, was when I lived in Newark, NJ. Where there is no blockade I am aware of. The economic blockade against Cuba not only prevents any trade between the US and Cuba, except for symbolic gestures between farmers facilitated by Jimmy Carter or something like that, but if you are a company trading with Cuba from another country, you cannot enter American ports for three months. And a whole bunch of other punitive measures as included by the Helms-Burton act.

So Cuban stores have really shitty food. At least they have an excuse. One of the strongest countries in the world has waged a prolonged, deliberate, malicious, inhumane expensive campaign aimed at toppling their government. Or maybe Newark, like Detroit, like Camden, like all those other cities in the US with their store shelves lined with representations of food and vegetables, maybe they have an excuse too.

The carrot and the stick policy doesn’t work usually, and it certainly doesn’t work in terms of toppling a government. Fifty years after the blockade, Cubans aren’t rallying in the streets for American style democracy (Hello Florida, 2000) or begging us to come and save them and erect StarBucks all along the Malecon. Politics isn’t a big issue in most households, where families eat dinner together and watch (¡terrible!) novellas. And Animal Planet. And wear Converse All Stars. And listen to the Beatles and Barbara Streisand. They drink beer. They eat meat. They share. Their food. That they don’t have. And in the morning, when they wake up, they sweep the floors and make breakfast. 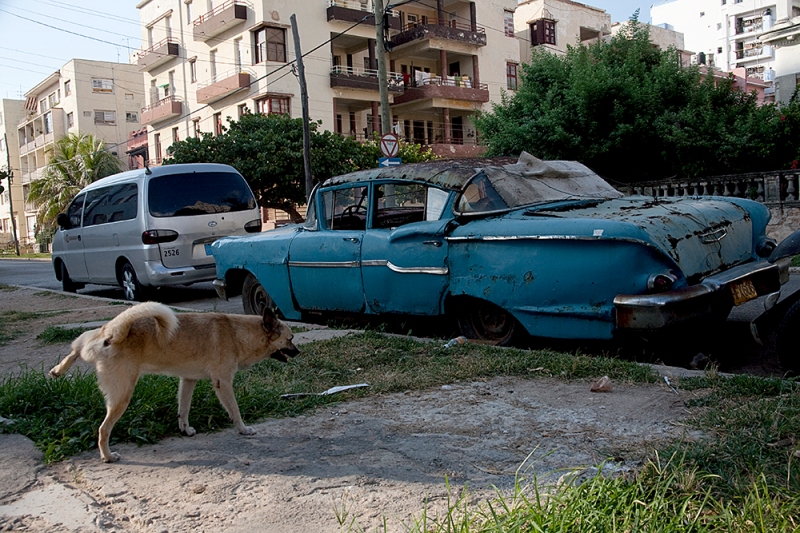